On the 19th of August 2011 Agricultural & Energy Carriers (AEC) agreed to provide their services for the carriage of 30,000 mts corn from Paranagua, Brazil to Puerto Cabello, Venezuela. The Charterers Agri Commodity Trade Inc, Weston, FL – U.S.A had a need to load a minimum/maximum cargo quantity with a narrow spread of days for the arrival window in the loading port.

The AEC staff and management is in procession of decades of experience with all of the South American trades, which resulted in a smooth and trouble-free performance of the this grain voyage to Venezuela. The voyage started on the 31st of August 2011 and ended on the 4th of October 2011. 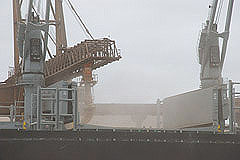