Agriculture & Energy Carriers was the first vessel Operator to officially terminate the U.S. trading ban on vessels that previously had called Cuba, by successfully concluding a Charter of a Bulk Carrier that came open in Cuba after discharging and straight thereafter loaded the vessel in USA.

The U.S. previously had a 180 days ban to call U.S. ports on vessels that had called Cuba (except for U.S. Government approved cargoes). 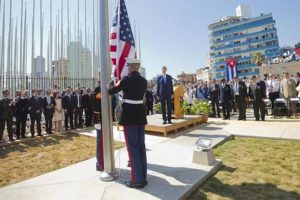 ‘Reacting quickly to the news from the U.S. Treasury Department, concerning the amendment of the Cuba sanctions, AEC chartered a 32,633 dwat 2011 built Bulk Carrier that was spot in Cuba for delivery in in Virginia to load a full cargo of grains’ says Chartering Manager Claas Grafe, and he continues ‘In close coordination with the agents, coast guard, and the Shippers, the vessel arrived already on the 25th of October 2016 and sailed fully loaded on the 28th of October 2016.’

AEC had the MV Nalinee Naree, a 33,843 dwat Bulk Carriers Built 2012, under Charter to perform a wheat cargo into Santos, Brazil.

So how does the shore grain unloaders really look and work?  Well, there are various systems. The ones employed at the ‘Pacifico’ terminal, now bought by Messrs Bunge, are the ones we call ‘sucker’. Instead of discharging with grabs into shore hoppers, the suckers work similar to a large vacuum cleaner and create a very smooth discharging operation with little risk of any stevedore damages. 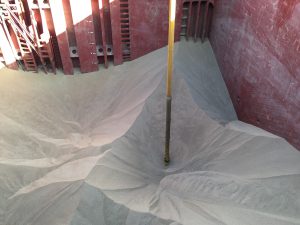