Port Hedland is the world’s biggest bulk terminal with much of the demand coming from China. China’s recent increase in buying of iron ore is driving demand and the need to expand capacity has in turn led to an increase in infrastructure spending for port and rail facilities.

MV AEC Belief’s open hatch, box-shaped holds makes her an ideal carrier for such a cargo. 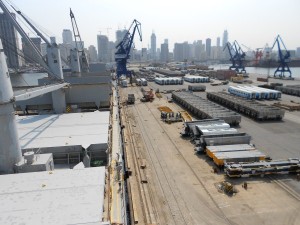