The Amazon River has always been a fascinating place. It is the largest concentration of fresh water in the world. The river’s size and depth are astonishing in many areas and amazingly stretches from the Atlantic Ocean through Brazil and Peru the whole way to Ecuador. However, depending droughts and floods the river level can vary as much as 45 feet in some areas. 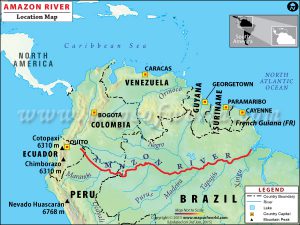 In the old days basically only the Port of Manaus had some activity when it comes to larger ships. One of commodities imported was bulk wheat for human consumption which is still ongoing today. However, over the past decades more sourcing of grains and more export terminals have appeared. It is making a lot of sense in terms of internal transport costs compared with hauling the grain products to South Brazil for export. This development is of course after massive resources have been allocated to infrastructure enabling the Brazilian harvest to arrive from North West Brazil to the Amazon River and be loaded into larger Bulk Carriers.

In January 2017 AEC arrived in Santarem (Amazon River) with a full cargo of bulk Urea (fertilizer) from The Baltic Sea. 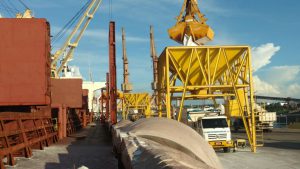 The Urea is discharged with the ships cranes and attached grabs into shore ‘hoppers’, allowing the cargo to be safely loaded into trucks.

AEC is, also in January, loading two vessels in the Amazon River. One with grain products and one with Kaolin Clay in bulk.