Rebars, WFB (wide flange beans) and Merchant Bars during her 3rd voyage after delivery from yard. 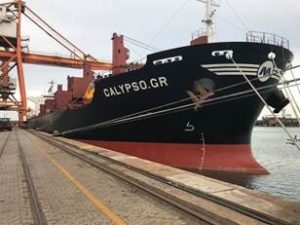 Due to the complex of the operation, AEC was not only represented by our Supercargo – which is our “modus operanti” – but also by the staff from the back-office being Mr. José Cavalieri – Operations and Mr. Anderson Silva – Chartering. Everyone were present to follow the loading operation and certifying that everything would go smoothly and to ensure that the cargo would be loaded in good and secured manner to reach it’s destination as loaded. 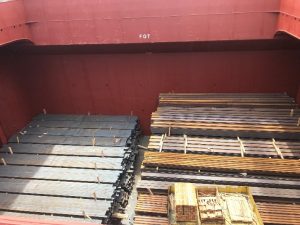 This was indeed another great and successful operation.

The words ‘Order and Progress’ on the Brazilian flag has often seemed misplaced. We follow up on the past Brazilian inputs from AEC’s website (latest https://aecarriers.com/the-brazilian-parliament-votes-in-favor-of-presidential-impeachment/ ).

The fact that ex-President, Luiz Inácio Lula da Silva (Lula), finally began his 12 years prison sentence is something exceptional for Brazil. For foreigners with little knowledge about the “real” Brazil, the ruling and sentencing could seem somewhat political and maybe unjust. The international media does not seem to use any effort or time to establish the facts. Instead the ex-President is often portrayed as a hero and as the saviour of the poor. There seem to be no stories about how Lula and his party faithful have undermined the safety net that should be under the less fortunate part of the Brazilian population. Yes so far the judges managed only to punish Lula for something that maybe does not seem like a big deal. However this is a bit like when the U.S. managed to take Al Capone down for tax fraud and not for the many people he ordered killed. However it is worth bearing in mind that Lula’s still has five additional corruption cases against him to be heard in court. One can also expect that more attention is brought to what has been channeled via his son. We could be talking about fortunes starting with a ‘B’ and not an ‘M’.

Many argue that the other political parties are also corrupt, which is likely correct but that is however no excuse. Brazil’s “Lava Jato” (Car wash), as the process has been called, is a fundamental process for Brazil to regain it’s status as a respected country and this time with significantly less corruption. Few know that before Lula’s Presidency, Brazil was on the right track in terms of corruption, the private sector was practically cleaned up and government corruption was improving. Lula’s “union like” organized corruption plans however took government corruption to a complete different level. The scheme was aimed at including as many political parties as possible, creating an environment where everyone were involved at some point and therefore no one could sell the others out. Obviously, the private sector was dragged in to fund the show, especially the huge construction companies that involved in Government lead infrastructure projects. It went so far that these schemes were exported to other countries where the Brazilian Development Fund (BNDS) would finance projects away from the spotlight. All this without the minimum consideration for Brazil’s own appalling infrastructure that so badly needed the funds. Petrobras was also an obvious source with international oil prices soaring at the time of Lula presidency. 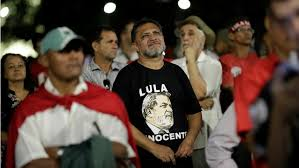 The Car Wash process seem to be the most efficient attempt to tackle corruption that has ever happened in Brazil, however it is clear that the process is very tough and has taken its tolls on the country. However, without a thorough clean-up, Brazil’s future will continue to be negatively affected. You may wish to be reminded that Brazil is said to be “abencoado por deus” (blessed by God). This would seem to be at least close to factual when you consider the incredible wealth of natural resources that means that Brazil should be self-sufficient and one of the riches countries in the world. Corruption has taken the country on the wrong path for too long.

Lula’s imprisonment is fundamental for renewed hope for Brazil and a very important mile stone for the turnaround of the country.

AEC congratulate our many hard working and honest clients and friends in Brazil and wish the absolute best for the country.